LVSO is back with a new series of fascinating events for all students passionate about medical sciences! We kicked off this academic year with a visit to the Leuven – based company ReGenesys BVBA.

This biopharmaceutical company located just outside the main Heverlee campus, in the Arenberg Science Park, is located in the Bio-incubator, where also other life sciences enterprises are housed. The company was founded in 2005 and over the years it grew and further developed as one of the promising companies in the field of regenerative medicine. What exactly makes it stand out?

ReGenesys is actually a subsidiary of a U.S. – based company, Athersys Inc. Instead of trying to develop conventional pharmaceuticals, the company focuses on researching therapeutic possibilities of stem cells. According to dr. Bart Vaes, who is the Associate Director at ReGenesys and who guided us during our visit, their product – called MultiStem® – has very high production potential (e.g. millions of doses). There are multiple fields where stem cells could be useful. For instance,  the company uses the therapeutic potential of the product to treat patients who suffered from ischemic stroke, as according to preclinical studies MAPC (multipotent adult progenitor cells, the basis of MultiStem®) have significant impact on regaining neurological functions post-stroke. If the clinical studies are succesful, this will have a significant impact on the patients, as current treatments are not available for the majority of stroke patients. Even though their line of work is tremendously demanding (the manufacturing phase of stem cells is much more challenging than of conventional pharmaceuticals and it requires more specialised equipment) the scientists of ReGenesys have set a noble goal, which is to refine their therapy to the point where it can become quickly accesible for every hospital and every patient in need. And by „patient” they don’t mean humans only – the stem cells therapy is being developed for use in veterinary medicine as well.

During our visit we also took a peek in some of the laboratories. Given how difficult it is to maintain cultures yielding billions of cells, ReGenesys prefers automated solutions. A very notable example of such solution is located in one of the smallest rooms in the building. It houses a Quantum Cell Expansion System, which is a bioreactor that deals with every aspect of culturing cells – from exchanging media to removing metabolites and carbon dioxide. It is worth mentioning, that ReGenesys was one of the first in Belgium to use this kind of technology. This device is a closed system, which partially solves the problem of possible contamination. Despite the steep price, it’s very compact size spares an even larger expense of building a typical cell culture room with UV cabinet, filters and other crucial equipment.

ReGenesys is a member  of RegMed Innovation Platform. This consortium, supported by the government of the Flemish Brabant, unites institutions involved in regenerative medicine research, which includes KU Leuven (but also a number of universities and companies from outside of Flanders) in a joint effort to create new solutions to medical problems. This fact leads us to believe that this scientific discipline has a bright future ahead, and that the possibilities for people interested in working with it will be immense, and not just in Belgium, but internationally. But for the time being, we in the LVSO are strongly rooting for our small local company as it makes huge steps to change the world for the better. 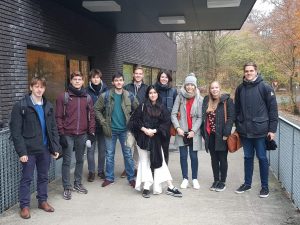